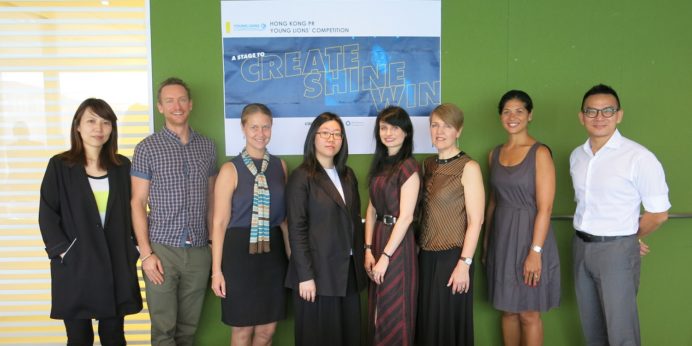 The inaugural CPRFHK Young Lions competition got off to a roar today with stunning performances from the five short-listed teams.  The first prize of a trip to the 2018 Cannes Festival of creativity was hotly contested, but eventually the judges reached a decision. Yvonne and Lottie from Golin (pictured above with judges) scooped top honours, winning unanimous approval from the judges with their Enough=Gau campaign.  They will join teams from around the world to participate in this year’s Young Lions’ competition.

Two teams – Bryan and Agnes from FleishmanHillard and Oscar and Jasmin from Racepoint  – were both awarded first runner-up. Their prize will be a trip to Singapore in September to participate in the Young Spikes competition. All three teams will also receive VIP invitations to the CampaignComms conference in Hong Kong on 13 June, courtesy of Campaign. A big thanks to all the judges for their time and expertise, and to Campaign and PRPA for their support.  To all teams who participated #Yourock!